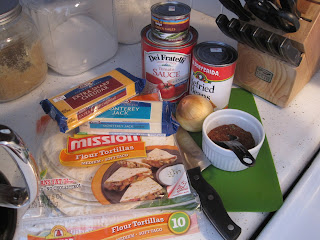 Ever have something super tasty to eat at potluck, or a friend's house,
and wish you had asked for the recipe?
A few years ago I had an awesome casserole type dish.
It had meat, tortillas, taco type seasonings, all layered with lots of ooey, gooey cheese.
Since that evening I have been on the hunt for a similar recipe.
After trying several that weren't quite right...
I decided to create my own!
(Complete recipe at the end of post, so don't worry about amounts and measurements. I wouldn't leave ya hangin')

I started with the seasonings. 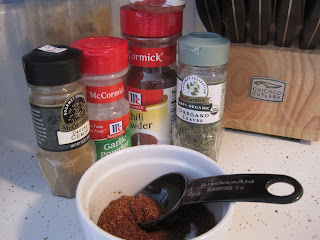 Which I mixed together in preparation to be added to a ground beef mixture.
I added 1 1/2 pounds of ground beef to a large pan, and browned it over medium heat.
I drained most of the fat off, and returned the pan the stove. 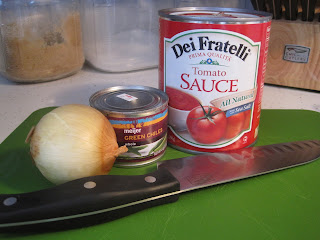 I added a chopped, yellow onion to the pan, and cooked for a couple minutes.
I poured my spice mixture over the beef and onion and let it cook for an additional minute.
Then, I added one chopped green chili and a can of tomato sauce.
I let it simmer for twenty minutes or so.
Into a 13x9 inch casserole dish, I scooped roughly one cup of the meat sauce mixture, and spread it evenly over the bottom of the dish.
I layered half of a package (5) tortillas on top of the sauce. 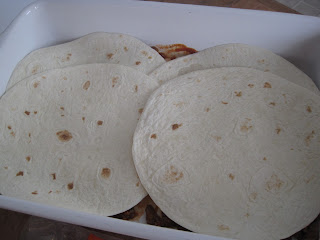 I cut the last tortilla in half for more even coverage. 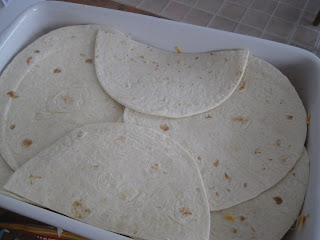 Spread half of a can of refried beans (don't mess with the fat free, get the real deal) on top of the tortillas.
(helpful hint: heat the beans first, it makes them way more spreadable) 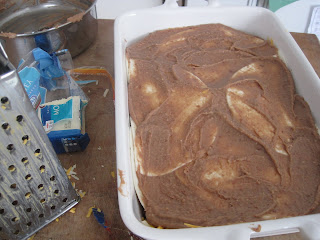 Top with half of the remaining meat sauce mixture. 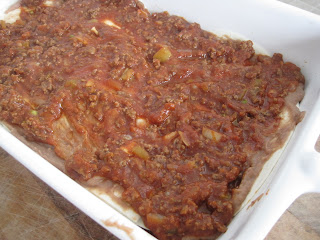 Layer with half sharp cheddar, half Monterrey jack cheeses
(another hint: I like to shred my own cheese to get a better melted consistency) 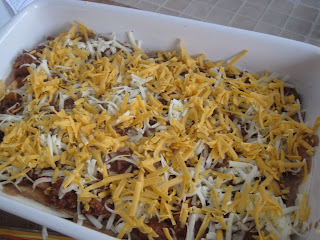 Repeat the layers, starting with the remaining tortillas and ending with the rest of the cheese.
Cover with foil, being careful not to let foil touch cheese.
Pop that baby into a 375 degree oven.
Uncover after thirty minutes.
Bake uncovered until cheese is golden and bubbly.
Viola! 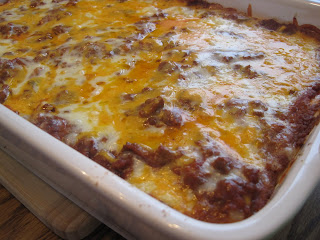 This stuff is killer! 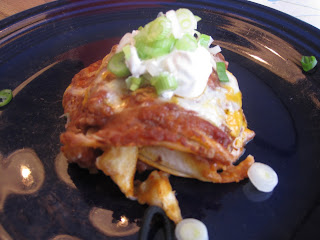 1 whole green chili (from a can)

½ teaspoon oregano (Mexican if you have it)

A pinch of cayenne pepper

Brown the ground beef in a large skillet over medium heat. Drain and return to skillet. Add the chopped onion to the ground beef and cook for another 2 or 3 minutes, or until onion is tender, stirring occasionally. Stir in chili powder, garlic powder, cumin, oregano, salt and cayenne. Cook for 1 minute. Add  the chopped green chili and the can of tomato sauce. Bring to a simmer. Turn heat to low and let simmer for 20 minutes.

Cover with foil, being careful that cheese does not touch the foil, and bake at 375° for 30 minutes. Remove foil and bake for an additional 10-15 minutes, or until cheese is browned and bubbly.