I thought that I would share with you one of my family's favorite recipes.
Stuffed Shells!
I found the original recipe on allrecipes.com (big surprise there, eh?).
But...
I changed it all up.
You can find my revised ( and WAY yummier) version here. 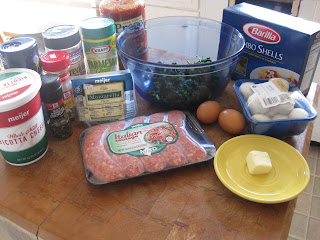 First, I like to bring a large pot of water to a boil, toss in  a little sea salt, and carefully add the shell pasta.
Make sure that you stir it every so often so the shells don't stick to the pot.
Next, I like to squeeze all the water from my thawed spinach.
I used spinach that we froze from our garden last summer, so I took a pair of kitchen shears to chop it up a bit.
If you are using store bought, you shouldn't have to do this ☺ 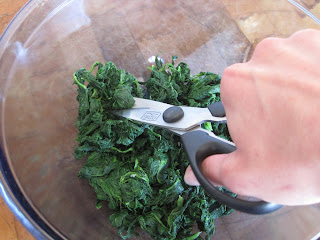 My super-cute assistant helping with the next step. 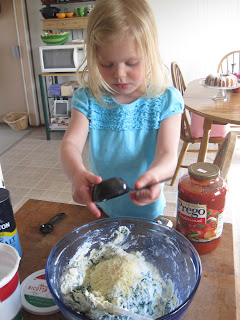 Mix the spinach, ricotta, eggs, half the parmesan, half the mozzarella, parsley flakes, salt and pepper in a large bowl.﻿
(I used half grated parmesan, half shredded parm, romano, asiago blend, instead of the plain parm. I think it had better flavor as a result.) 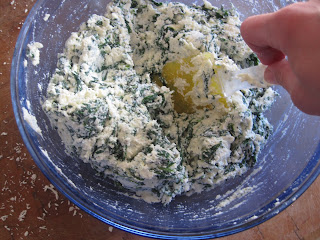 After that is all mixed, I toss it in the fridge until I'm ready to use it.
(I am completely paranoid about leaving raw eggs out for any length of time.)
At this point, your noodles should be finished.
I like mine al dente.  They are easier to work with, and they won't get mushy during baking.
Drain them and run COLD water over top to prevent sticking!
I set my oven for 350 degrees.
Next, I clean and chop my mushrooms.  Then toss them into a pan of melted butter, and turn the heat up to med-high.
I also start cooking my sausage. 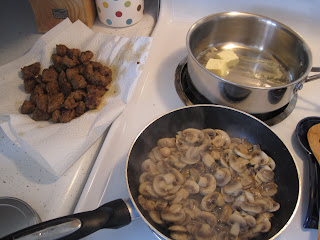 When most of the water has evaporated from the mushrooms, turn them off.
Once the sausage is no longer pink, transfer to paper towel to drain
Tonight I mixed a bechamel sauce into my pasta sauce, to make it creamier (it was way good also. Like how I am braggin' myself up;))
Here is what I did:
Melt 3 Tbsp. butter into a heavy saucepan over med-low.
Add 3 Tbsp. flour.
Whisk together until thick and bubbly.
Slowly, add 1 1/2 cups of room temperature whole milk.
(I used a combo of 2%  milk and heavy cream)
Add a little salt and pepper.
I turn the heat up at this point to medium-high, and keep whisking constantly until the sauce is thickened and almost boiling.
Turn off the heat.
Add the jar of pasta sauce... 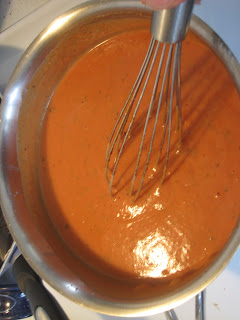 (sorry about the crappy sideways pic)
and the mushrooms.
Now it's time to stuff the shells.
Pretty self explanatory... 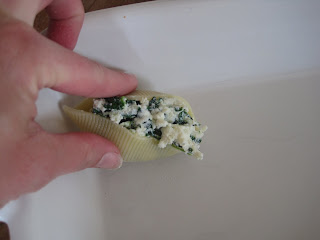 I used the entire package of shells today, because a ton of them broke.
Just fill the baking dish as full as you can﻿.  I don't ever measure the spinach/cheese mixture. Whatever looks good ☺ 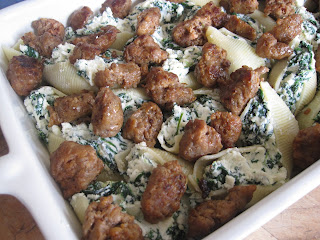 I tossed the sausage onto the stuffed pasta, but you can mix it into the sauce if you prefer. 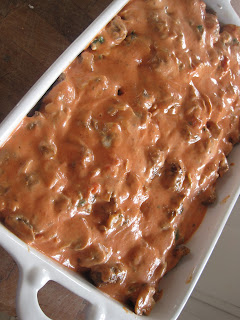 (Another awful pic. I must learn how to operate my camera software.)
Cover with sauce. 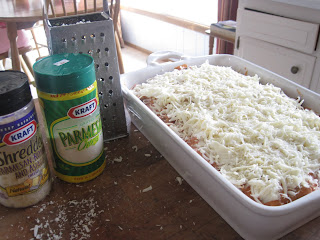 Pile on the remaining cheese.
Cover with foil.
(Make sure the foil doesn't touch the cheese.)
Bake for 45 minutes.  Uncover.  Bake for another 15 minutes. 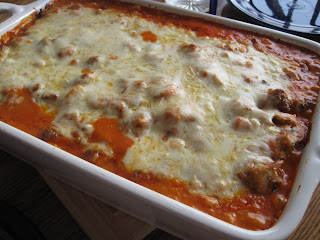 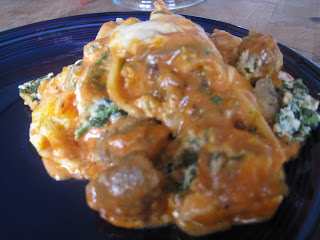 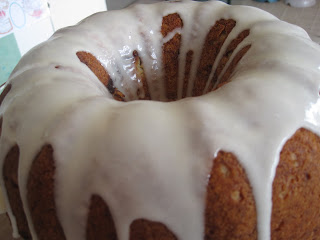 ﻿
Banana-bread-turned-bundt-cake!
Recipe here.
I only have one loaf pan right now (traumatizing Pyrex incident), so I decided to try this as one big "cake-like" thing in my bundt pan.
A few changes I made to the original recipe...
Spread half of the batter into the bundt pan.
Layer cinnamon-sugar-pecan filling (I doubled the amount of brown sugar to 1/4 cup) over top.
Spread remaining batter over top.
Bake for 50 minutes (or until inserted toothpick comes out clean).
Let cool in pan for 15 minutes.
Turn out onto a rack to cool completely.
Drizzle with vanilla glaze.
1 1/2 cups powdered sugar
1 Tbsp melted butter
1 Tbsp Karo syrup
1 tsp vanilla
Milk
Stir first four ingredients together.
Add milk a little at a time, whisking until desired consistency.
Hope you had a great weekend!
Jessie
at April 10, 2011